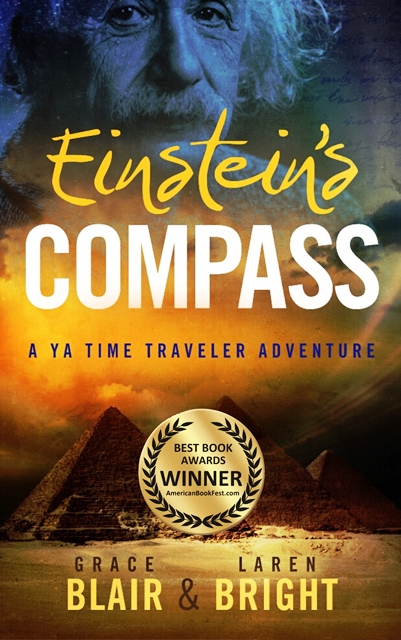 How did Albert Einstein come up with his wondrous theories of light and time?

In Einstein's Compass: A YA Time Traveler Adventure, a young Albert is gifted a supernatural compass that allows him to travel through time and space. He finds wisdom in other dimensions, like the lost city of Atlantis, but evil forces seek the power of the compass, including a monstrous, shape-shifting dragon from a different age.

Can the compass protect Albert from such villainy?

Order Now!
About the Book

From the Inside Flap

What if…… Albert Einstein, one of the greatest minds of the 20th century, was actually working with supernatural forces beyond imagination?
… young Einstein, at the age of six, received an ancient compass from pre-history that changed the course of his life and upon which balanced the very destiny of Earth?
… Einstein, a brilliant mathematician, was the reincarnation of a leading priest-scientist who lived during the time of Atlantis and whose twin brother, through a DNA experiment gone awry, was transformed into an immortal shape-shifting, power-mad dragon?
… Did Einstein become a key player in the unseen battle between Light and Darkness?
Einstein’s Compass takes readers on a hero’s adventure through time and across dimensions. It is a blend of historical fact and imaginative fantasy that challenges readers to distinguish between them.

From the Back Cover

The authors throw in elements of time travel, alien DNA, anti-Semitism, the fall of Atlantis, spiritual enlightenment, and reincarnation which work surprisingly well together. Notable characters Einstein meets, known as “Light Travelers,” include Moses, Akhenaten, and Jesus. Overall, this was a curiosity-arousing story with a well-crafted spiritual core carefully woven in with the threads of science, space, and time. There’s plenty of world building and enough character intrigue to keep readers turning the pages. A fun fantasy adventure. Einstein’s early life and influences are touched upon. I enjoyed the maturing relationship of Einstein and friend, Johann, along with the strength obtained from that bond. Exploring the young genius’s early antics was enjoyable. J. Lynn Else Historical Novel Society

Listen to an audio sample

Listen to sample on Amazon

Reviews from Goodreads.com
Disclosure of Material Connection: Some of the links in the page above are "affiliate links." This means if you click on the link and purchase the item, I will receive an affiliate commission. I am disclosing this in accordance with the Federal Trade Commission's 16 CFR, Part 255: "Guides Concerning the Use of Endorsements and Testimonials in Advertising."